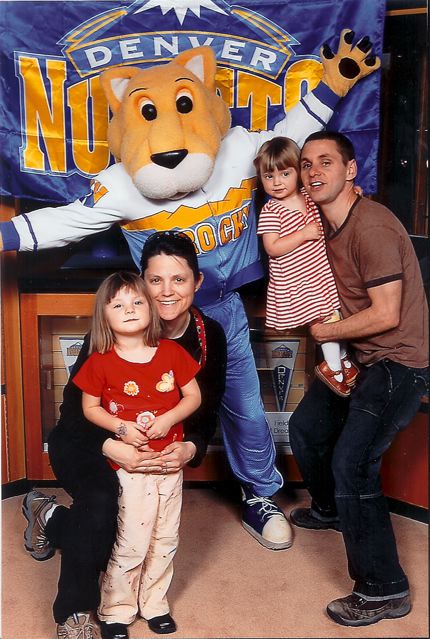 32,000 feet. Iâ€™m on a plane headed for Hawaii for the first time since my honeymoon twelve years ago. No aisle seat. No window seat. Crammed between a guy from Milwaukee and the girl I started dating 17 years ago. Nothing on the agenda, no responsibilities, pure freedom. The definition of heaven, right? Yeah baby. Yet hereâ€™s the truthâ€¦

Iâ€™m nervous and conflicted about this trip. I had trouble sleeping the night before leaving. I didnâ€™t fall asleep until after 3 AM, worrying about whether going on this trip was the right decision for my two little girls. My wife and I cried a bit before we left for the airport. Okay, fine, I almost cried, and she cried a lot. Such a girl. (I included that sentence as a means of blatant pandering to chauvinists who feel that any man who writes a blog called Scenes From Fatherhood is a pansy. I hope, but doubt, it worked. Anybody who reads this blog will realize that I am, in fact, a fully committed pansy.) And I am actually wondering whether I will be able to figure out what to do with myself for five days without my kids. Seriously, I am wondering whether this is really a good use of my time, and whether I will feel like a truly good person leaving my kids for five days.

What the hell happened to the guy who used to cruise from land to land with brazen confidence and uncontained personal ambition? The answer is very, very simple: I created the two greatest things I ever could â€” Sidney Grace (age 4) and Riley Max (age 2) â€” and now, on my way to supposed paradise, I am having trouble even imagining what purpose I could possibly have except for assisting, teaching and learning from them as they embark on their action/adventure superhero lives. What if I miss a key moment in their life? What things that donâ€™t involve children am I even interested in anymore? What do I do with time on my own? What is my purpose or value without them? Holy shit, Iâ€™ve gottenâ€¦ old.

It is the first time in 4 1/2 years that my wife and I are going somewhere, together, without our kids. I have never been apart from my kids for more than 48 hours. I have worn this as a badge of honor, arrogantly proclaiming it to others as if it makes me the coolest dude in the universe. Instead, I suddenly realize itâ€™s made me too dependent on them. Now Janette and I are leaving them with a water bowl and seven pizzas on the floor of the kitchen, and high tailing it to Oahu for five days. (Okay, fine, their grandparents are gonna be with â€˜em too.)

So it occurred to me that right here, right now, crammed between Milwaukee and my Original Baby Doll â€” who, incidentally, is still all that, and I will strive to remind her of that on this trip â€” this is the perfect time to finally start writing Scenes From Fatherhood, the book / blog / sissy boy observations and musings I have been meaning to write for two years. Several moms who spend time with me with my kids have suggested I write something like this. In fact, several have suggested I teach a class on it â€” a fathering class. â€œIâ€™d sign my husband up,â€ more than one mom has told me. Oh sure, I tell them â€” like my goal in life is to become known as the Worldâ€™s Biggest Asshole to all the fathers in my neighborhood.

But upon reflection over the last several years of my life, particularly after the birth of my second child, I donâ€™t think most women should choose a man quite like Iâ€™ve been over the last few years as a husband and father. I think they should aim for someone in between me and the Traditional Man. So perhaps as a few Traditional Dads review their lives and increase the priority they place on their kids, attempting to create a more even balance between their work and family life, I will attempt to balance my life out as well, and get back to one where I am both a devoted family man and a satisfied and successful Traditional Working Man as well. Well, maybe not a true 9 to 5 Traditional Working Man â€” Iâ€™m just not really cut out that way â€” but at least a man whose ambition stretches beyond the vision of his children. I certainly used to be a man fueled by Big Dreams Of Grandeur and Glory.

All of those things seemed of trifling and selfish importance after the birth of the great warrior princess Sidney Grace Cullinan on September 21, 2002. I fell so in love with that girl, and found that looking after my kids was so natural and enjoyable to me, that my primary identity instantly became Superdad. Coincidentally, my wifeâ€™s career started skyrocketing at the time â€” after all, it takes a superhero to birth a superhero â€” and she was spending a fair amount of time working. It seemed wrong to have her spending her personal time on family business chores rather than playing with her kids, and it also seemed wrong for me to continue to work long hours on a teaching job I loved but that didnâ€™t pull in nearly the dollars per hour my wifeâ€™s job made.

Also, my superhero wife is legally blind and doesnâ€™t drive â€” you try being legally blind, getting an advanced degree from Stanford, becoming Director of Content Design for a major corporate training company, and being a great mom whose kids adore her who even cooks a few meals for dinner each week, and youâ€™ll understand why I am one smart dude for snagginâ€™ this kick ass cutie from the ranks of The Unhitched â€” so by default I am the only member of the family who can drive kids to doctor appointments or go pick up the groceries.

And hereâ€™s what happened, in retrospect: Over the last few years, in my everyday attempts to be a great dad and husband, I lost sight a bit of my own personal Big Picture. I made myself too one-dimensional, a bit too dependent on the success of my three girls for my own happiness, spending way too few hours a week on my own career to feel totally fulfilled, occasionally wondering what happened to the guy who used to accomplish big things in music and teaching, but finding no solution to this dilemma in our overbooked San Francisco Bay Area schedule.

So after spending much of the past few years focusing almost exclusively on my family responsibilities, Iâ€™ve readjusted my focus. We shook things up and built our dream home in a new state â€” Colorado â€” leaving behind the place and most of the people with whom Iâ€™ve spent the previous 36 years of my life. Iâ€™m working full time again, having launched a new career as Doctor Noize that focuses my ambition and energy and allows me to combine my love of parenting, music, writing, creativity, and teaching. And I find myself more motivated to make money than I ever have been before, as if I want to make up for lost time over the past few years or something. For more on Doctor Noize, visit www.doctornoize.com or Doctor Noizeâ€™s Blah Blah Blog….

This blog â€” Scenes From Fatherhood â€” will be filled primarily with scenes from my adventures as a parent. It will reveal the Great Things discovered by my children and their little friends on their action/adventure superhero journeys. It will also reveal the Great Reminders that our kids offer to the Obsolete Children in their lives (Dr. Seussâ€™s great nomenclature for adults), giving us a chance to relearn them. It will occasionally include philosophical meanderings like todayâ€™s premier installment. And it will eventually include some of the less impressive moments I have represented and encountered, both as a parent and as a child who observed his own parents dealing with unwinnable situations.

But for now, I will close with this, my first alleged Pearl Of Wisdom: My kids, and the kids Iâ€™ve had the privilege of teaching and playing with, are the best thing that ever happened to me since my own childhood and my wife chose me as her man. Yours are too. And they are generous enough of spirit, every single day, to let us Obsoleters join in and relive that state of childhood again. Donâ€™t miss out on it.

It is simply this: You must actually enjoy the privilege of spending time with them. If you donâ€™t, theyâ€™ll sniff you out in a second and move on to those whoâ€™ll live in their world with them. Considering that weâ€™re talking about people who canâ€™t properly shop for their own groceries, assess their own emotional state of mind, and in some cases dispose of their own bodily waste, kids are shockingly efficient at quickly analyzing your true interest level in them and adjusting their priorities accordingly.

So with embarrassingly mixed feelings, Iâ€™m leavinâ€™ for Hawaii. I have now finished my first Scene From Fatherhood, on my laptop computer on a plane to paradise, with several hours to go before we touch down. And Iâ€™m proud to say that Iâ€™m now gonna watch some in-flight infotainment I donâ€™t give a shit about. (This is one of my new goals in life: Finding a little time each day to spend on things that add no measurable value to my life, things that are not a part of my goals and plans â€” just existing inconsequentially for several moments each day without thinking I should be doing something more useful with my time.)

And Iâ€™m loosening up a bit and trying to look forward to five days without my kids. Iâ€™m gonna baby my wife on this trip. She deserves it. And I look forward to seeing a few hot chicks in bikinis on the beach. Is that too much to ask? And after 4 1/2 years of watching my tongue, Iâ€™ve decided Iâ€™m going to swear a bit for the next five days. Fuck yeah. With apologies to my mother and my fine Mormon relativesâ€¦ That feels good.

Until next weekâ€¦ Aloha.