It’s Independence Day!  That’s July 4th for those of you who are not American history scholars.  And as a father of two wonders and husband of an additional wonder, I can tell you in no uncertain terms that while independence has its merits, it is certainly not all that it was cracked up to be by our Founding Fathers.  If I was independent of my three babes, my life would be far less meaningful, far less rewarding, far less loving, and far less fun.

On the plus side, I’d get to watch more movies with either Will Ferrell or hot naked women.  But all in all, I’ll take fatherhood, husbandhood, and my lack of independence any day.  (As further clarification, by “any day,” I mean “on most days.”)

Today we are going to our city’s Independence Day parade and celebration, and then Sidney and daddy are going on a dream date to see the Colorado Rapids (the local Major League Soccer team) play in their beautiful brand new stadium.  After the game will be a giant fireworks show.  Sidney and I went to the July 4th game last year too.  Sidney’s on a soccer team now and truly shares her daddy’s love of soccer — both playing and watching it.  That is so awesome.  God I love that girl.  Riley will come to the games in future years too when she’s older.  Returning home at 11 PM is probably still a stretch for Riley.

Our love of soccer segues into a story I would like to share with you.  This is a soccer story.  It is also a “man wearing a pink princesses shirt” story.  And it is a story of betrayal.  So listen up Coach Steve:  I’m calling you out!  But don’t worry, I’ll still be your assistant coach next season.  I’m just that big a guy.

Our story starts on Sidney’s first day of soccer practice.  She has joined a team for the first time (at age five), and I have volunteered to be her assistant coach.  Once upon a time, I was quite the ambitious soccer guy.  I was a successful high school varsity boys soccer coach for three years.  Before that, I was actually on the varsity soccer roster at Stanford for a time, a distinction I enjoyed obtaining more than I actually enjoyed playing on the team, which was very time consuming and prohibited me from the proper time to chase music and girls in college.  So I retired early from college soccer.  At this point, my job as an assistant coach for the Pink Princesses consisted entirely of showing up most of the time to practices and games and doing whatever Coach Steve told me to do.  And I was very fond of that level of job responsibility.

Anyway, on Sidney’s first day of practice, Coach Steve’s wife gave every girl a pink T-Shirt that had a soccer ball and the words “Princesses” on it.  Also, the image of the soccer ball had a pink crown on it.  A nice touch.  Practice jerseys.  Cool.  The girls loved them.  Oh my god did they love them.

Then came the unexpected:  She pulled out two adult size pink princesses soccer shirts.  One for me and one for Coach Steve.  ‘Okay,’ I thought, I’m dedicated enough to my girls and comfortable enough in my incredibly pronounced masculinity to take one for the team and wear a pink princesses shirt that is several sizes too big for me — thus emasculating me in just about every conceivable way — in public.  Coach Steve put his on.  Hey, I thought — if Coach Steve is gonna wear his, I’m gonna wear mine.  No problem.

So each Wednesday night for practice, and each Saturday night for games, I could be found prancing about in public in my pink princesses T-Shirt.  Coach Steve did too.  We always wore our pink princesses shirts.  I got quite used to this.  Unified in our selfless support of our girls.  Our family would often stop at the Whole Foods Market, that Lola Granola haven of grocery stores, on the way home from games on Saturday to get groceries and have lunch, where I would proudly don the pink princesses shirt I was swimming in for all to see.  No problem.  I didn’t even take it off between the game and the grocery store.  I waited until we got home.  Because I’m such a man.

And now for the betrayal:  picture day.  We show up on the morning of the game that team pictures are being taken.  It’s a bitterly cold Colorado winter morning; everyone’s wearing coats, hats, and mittens until the last possible moment before the pictures.  Our team gets up to the photographer.  Time for the team photo.  The jackets come off and we all rush to the team photo spot.  The girls are all wearing their game day uniforms.  I am wearing my gigantamongous pink Princesses shirt the coaches always wear to practices and games.  Last thing, Coach Steve takes off his big jacket and sits down on the other side of the picture from me beside the girls… in a very manly and perfectly fitted red collared shirt with a macho official soccer coaching logo on it.  What? my mind is thinking as the photographer tells us to look forward and smile for the picture in the frigid cold thirty degree temperature.

“Steve, where’s your pink princesses shirt?” I ask him immediately after.

“Oh, I um, forgot it,” he says with a sincere lack of conviction, after approximately ten straight appearances in the pink shirt.  The referee blows the whistle.  We start the game.

I will be bringing Coach Steve a very special scarf, necklace and flamboyant hat to wear for next season’s team picture.  Until then, please enjoy the following team photo: 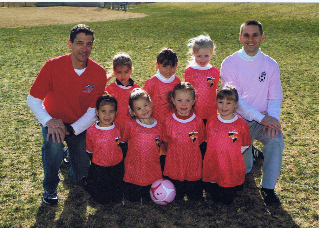