The following people made My Oyster possible by charitably contributing their talents, resources, and spirit. Thank you! Here is a brief synopsis for those who were otherwise occupied… 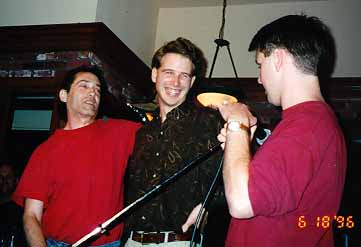 Jay Kadis (pictured at right with Phil Blackford and me) is My Oyster’s essential patron of the arts, and I am deeply grateful to him. A tireless and gifted producer, engineer, and friend through several years of production, Jay’s technical and musical talents are only superseded by his acute powers of observation, e.g. “that’s not exactly a recording tuba.”

Phil Blackford‘s talents at mixing musicianship and engineering were the key to putting all these elements together. His devotion to detail must be seen to be believed. Phil is to blame for placing every note, hit, mistake, and effect where it now exists for your listening pleasure or discontent.

Janette is the brightest smile on my face. My mother, Leola Cullinan, has supported me and this project in every way. The creativity of my father Terrence and my brother Tracey still inspire me. My grandmothers, Elizabeth Cullinan and Edna Barnes, contributed generous support. I consider all pizza delivery persons a part of my extended family. 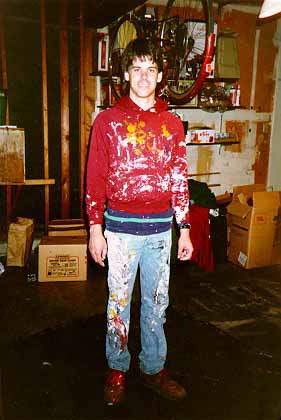 CCRMA and everyone there let me haunt their house. Greg Ryan is Lord of the Lower Registers. Michael Lowe (pictured at left) created a beautiful painting despite the subject matter and has the most colorful jeans in the world. Die Oystersingers sangen ausgezeichnet. All the great things you hear about Maestro Sano are true. Kwame Anku made movies and played guitar. Rob Whitlock changed his hairstyle and moved out of state after his involvement in this project. You should hear Emily Bezar‘s recordings. I’ve never met a more creative person than Christian Lowe. Perry Cook did some digital cheating engineering for us and is the Hardest Working Man In Chant. Ansel Kanemoto took pictures and could command the Enterprise if given a shot. Scott Chowning didn’t break a sweat in the studio and sang for pizza. Elizabeth Zolotusky was ready to step in if Scott couldn’t conquer his fever. Maureen Chowning was the children’s vocal coach, and for her efforts Scott and Elizabeth let her have one piece of pizza. John Tenney lead the string section and ate lots of carrots. Howard Kadis became the first guitarist in recorded history to request that written notes replace all chord symbols in his part. Amy Lieberman conducted Bright In Your Ways for the first time, and members of the 1992-1993 Stanford Chamber Chorale were the first to perform it. Jim Dookie gave valuable advice on horn arranging. Cro-Magnon man made many important contributions to what we are today. Chris Otto hung out in the control room and played with his laptop computer. Martin Pukownik came to the rescue in the mixing studio in the final hours. Mark Van Horn played air guitar on all tracks except The Story Of Heaven. Cindy Kuhn at Blackside, Inc. provided generous assistance in locating the owners of television broadcast recordings used in Little Rock Don’t Break. Howard W. Hays at the UCLA Film and Television Archive kindly gave permission to use the Governor’s speeches. Dave Grossman wanted to be mentioned in the credits.

In short, it was a long day, but a good one. I am indebted to all who create and perform that which inspires, enlightens, entertains, or annoys me into considering and creating, and all who support me by making My Oyster yours. I hope you enjoy it.